Mac App Store: The Mac will only run apps downloaded from the Mac App Store. Mac App Store and identified developers: When you try to open a new app and it’s not on the list of identified. You can install apps from the Chrome Web Store. Once you've installed them, you can keep track of what you've installed and remove an app if you want to. Note: Some apps in the Chrome Web Store. Allow other apps & extensions from the Chrome Web Store only—Users can install all apps and extensions from the Chrome Web store except the ones that you block. Users can only install apps from the Google Play store that you allow. (Mac) Set Chrome app and extension policies (Linux) Was this helpful? How can we improve it? If you still feel like Google Chrome is slowing down your Mac performance, by all means, go ahead and remove it, I recommend Safari instead. FTC: We use income earning auto affiliate links.

Now that the dust has settled on Apple’s acquisition of Fleetsmith, I want to discuss their removal of the Fleetsmith app store and why I think Apple should bring it back in a different way (as a Mac App Library), even as a possible API for third party device management systems to tie into as well.

About Apple @ Work: Bradley Chambers has been managing an enterprise IT network since 2009. Through his experience deploying and managing firewalls, switches, a mobile device management system, enterprise grade Wi-Fi, 100s of Macs, and 100s of iPads, Bradley will highlight ways in which Apple IT managers deploy Apple devices, build networks to support them, train users, stories from the trenches of IT management, and ways Apple could improve its products for IT departments.

Through Apple School/Business Manager, Apple allows IT departments to purchase and install apps through the Mac and iOS App Stores and then wirelessly load them on all of their devices. On the iOS side, the feature does all one would want since all of the apps have to come through the iOS App Store. However, there aren’t many apps that I’d be deploying that are available through the macOS App Store on the Mac. The main “business” application loaded on a lot of company Macs is Microsoft 365, but then apps like Zoom, Chrome, Adobe Creative Cloud, and others must be installed using a .PKG file through a particular MDM vendor. Depending on the program, it can be quite cumbersome to get it loaded correctly, and then you must update the .PKG file whenever an updated version is released.

I understand why Apple killed off the Fleetsmith app store. I’m not too fond of the decision, but I get it. Fleetsmith had created an app store full of programs it didn’t have a license to distribute. No one complained when a start-up MDM vendor had done this, but other companies would have likely complained to Apple if they’d kept it running it post-acquisition. It was a lose-lose situation all around, and ultimately, IT departments who were using Fleetsmith got the short end of the stick.

What I’d like to see Apple do in the future is to create a ’Mac App Library database where companies like Adobe, Google, Zoom, and others can upload their apps to Apple without needing to be sandboxed or reviewed, and they’d be available within either Fleetsmith or possibly within a library that other MDM vendors could tie into as well. It would be a win for Apple because it would make it even easier to deploy more Mac apps. It would be a win for the companies behind these apps because they’d have an easier time getting installed on their customers’ machines, and it would be a win for IT departments because their non-App Store Mac apps would be a one-click installation.

There is certainly a lot to iron out on how it would work, but I think Apple should pursue top-rated apps that will not ever be in the Mac App Store. What do you think? If you manage Macs at work, would you like Apple to work with popular enterprise apps to create a “Mac App Library”?

Photo by Domenico Loia on Unsplash 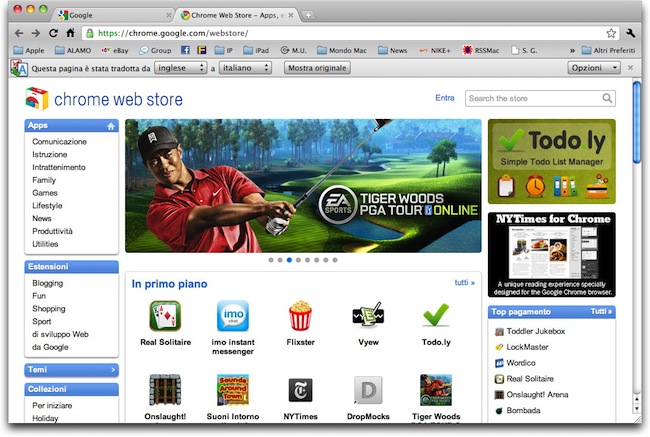 The Google Chrome browser is now available as an Apple M1 native application, for those of you lucky enough to have M1 Mac Mini, Macbook Air, or Macbook Pro systems. (If you've been living under a rock for the last few weeks, the M1 is Apple's newest in-house-designed ARM silicon, which the company began selling in traditional form-factor laptops and Mac Minis for the first time this week.)

Google presents Chrome for download as either an x86_64 package or an M1 native option—which comes across as a little odd, since the M1 native version is actually a universal binary, which works on either M1 or traditional Intel Macs. Presumably, Google is pushing separate downloads due to the much smaller file size necessary for the x86_64-only package—the universal binary contains both x86_64 and ARM applications, and weighs in at 165MiB to the Intel-only package's 96MiB.

In our earlier testing, we declared that the previous version of Google Chrome—which was available only as an x86_64 binary and needed to be run using Rosetta 2—was perfectly fine. That was and still is a true statement; we find it difficult to believe anyone using the non-native binary for Chrome under an M1 machine would find it 'slow.' That said, Google's newer, ARM-native .dmg is available today, and—as expected—it's significantly faster if you're doing something complicated enough in your browser to notice.

The first benchmark in our gallery above, Speedometer, is the most prosaic—the only thing it does is populate lists of menu items, over and over, using a different Web-application framework each time. This is probably the most relevant benchmark of the three for 'regular webpage,' if such a thing exists. Speedometer shows a massive advantage for M1 silicon running natively, whether Safari or Chrome; Chrome x86_64 run through Rosetta2 is inconsequentially slower than Chrome running on a brand-new HP EliteBook with Ryzen 7 Pro 4750U CPU.

Jetstream2 is the broadest of the three benchmarks and includes workloads for data sorting, regular expression parsing, graphic ray tracing, and more. This is the closest thing to a 'traditional' outside-the-browser benchmark and is the most relevant for general Web applications of all kinds—particularly heavy office applications such as spreadsheets with tons of columns, rows, and formulae but also graphic editors with local rather than cloud processing. Chrome x86_64 under Rosetta2 takes a significant back seat to everything else here—though we want to again stress that it does not feel at all slow and would perform quite well compared to nearly any other system.

Finally, MotionMark 1.1 measures complex graphic animation techniques in-browser and nothing else. Safari enjoys an absolutely crushing advantage on this test, more than doubling even M1-native Chrome's performance. The Apple M1's GPU prowess also has an inordinate impact on these test results, with Chrome both native and x86_64 translated on the M1 outrunning Chrome on the Ryzen 7 Pro 4750U powered HP EliteBook.