Editor’s Note: Earlier this week, Church Militant, the media apostolate run by Michael Voris, published an online article with the shocking headline, “Is the SSPX Sheltering a Sexual Predator?” The article accuses the leadership of the Society of Saint Pius X (SSPX) – an international priestly society founded in 1970 by Archbishop Marcel Lefebvre (1905-1991) – of gross negligence (at best) and deliberate cover-up (at worst) in relation to one Fr. James McLucas, a priest of the Archdiocese of New York who was suspended from ministry due to accusations of sexual abuse (his name appears in a recently published archdiocesan list) and who has assisted the SSPX on occasion due to his interest in traditional doctrine and liturgy.

Needless to say, the accusatory article published by Church Militant has made considerable waves in the Catholic blogosphere, causing scandal and confusion as a result. The SSPX has responded with a press release (full text below) addressing several relevant points and ultimately reiterating the Society’s commitment “to protecting all minors and vulnerable adults and to cooperate fully with civil and ecclesiastical authorities.” Church Militant, in turn, has doubled down on its stance, publishing two additional articles on the subject to date (see here and here).

Coulombe was introduced to the SSPX priests and seminarians in those days by Bishop Richard Williamson, who became fascinated with the former stand-up comedian’s work. Hoffman compiled a very convincing and thorough dossier that he forwarded to then-District Superior Fr. Thank you to Fr. MacDonald and the St. Anthony Hammer of Heretics Mission in Rockwood, MB Canada for this talk about the on-going crisis in the SSPX.To those.

As longtime Catholic Family News readers will recall, Michael Voris and his Church Militant organization have long since harbored a profoundly negative bias against the SSPX, routinely referring to the Society as “schismatic” and strongly warning Catholics not to attend Masses offered by SSPX priests – even going so far as to claim that Catholics “do not fulfill [their] Sunday and Holy Day obligations through regular, planned, premeditated attendance at SSPX Masses.” CFN’s longtime editor John Vennari (R.I.P.) produced excellent rebuttals to Voris’ attacks on the Society, as well as to attacks on CFN, The Remnant, Angelus Press, and other Traditionalist outlets dubbed “Reactionary Catholic Media” by Voris (see here and here).

Thus, it could be the case that Church Militant‘s recent accusatory articles are simply the latest manifestation of their long-standing campaign to defame and discredit the SSPX, an agenda that Catholic Family News continues to find both baffling and abhorrent.

On July 23, 2019, Church Militant published an article entitled “Is the SSPX Sheltering a Sexual Predator?” by James Baresel. This misleading and slanderous report deserves clarification. Both charity and justice should be hallmarks of any Catholic.

The main accusation centers around Fr. James McLucas, a diocesan priest who occasionally helps the Society of Saint Pius X. While not a member of the SSPX, Fr. McLucas was named in the August 2018 Pennsylvania grand jury report. Even though the information in the report was inaccurate, it has not stopped secular and Catholic outfits from labeling him a “sexual predator.” (For more on the broader question, please see: https://catholicherald.co.uk/magazine/the-trouble-with-lists-of-credibly-accused-priests/) As no civil or canonical proceedings have ever found Fr. McLucas guilty, nor has he ever been charged with any crime, these accusations are profoundly defamatory.

Fr. McLucas’ lawyer issued the following statement in 2018 when the recent accusations were first made:

While Father McLucas was not charged with any crime, the shocking and horrible accusations in the report – without published evidence, without trial, and without due process of law – will nevertheless blacken his reputation and destroy him in his profession.

The right to defense: the principle of natural and canon law of presumption of innocence must also be safeguarded until the guilt of the accused is proven. Therefore, it is necessary to prevent the lists of the accused being published, even by the dioceses, before the preliminary investigation and the definitive condemnation. (https://www.churchmilitant.com/news/article/msgr-bugarins-ignorance-damaged-fr-perrones-reputation)

The Role of Church Militant

In both situations, Church Militant assumes the place of a judge that only civil or religious authorities are entitled to.

Speaking of Church Militant’s methodology, we must draw attention to this sentence: “SSPX priest Nicholas Stamos informed me by phone on July 18 that McLucas is still participating in the organization’s work.”
Fr. Nicholas Stamos wishes to make clear: he has never heard of, nor spoken to, the author of this article. He had one call from earlier in the summer, who apparently falsely said he was an old friend of Fr. McLucas, and that he wished to get in contact. Fr. Stamos directed him to a priory that Fr. McLucas sometimes visits. Neither Fr. Stamos nor anyone at the latter priory ever heard from Church Militant. Is this Catholic journalism?

The Society of Saint Pius X is committed to protecting all minors and vulnerable adults and to cooperate fully with civil and ecclesiastical authorities. In addition, we are committed to both helping victims as well as those that are accused. We do not unduly assume the role of judge and leave any investigation to the proper authorities.

Why the SSPX Exists

We stress that the Society of St. Pius X was founded by Archbishop Lefebvre to form and help Catholic priests. As our Statutes state, the central charism of the SSPX is the Catholic priesthood:

[The Society’s activities] include all the works necessary for the formation of priests and whatever pertains thereto, whether the candidates be destined to be members of the Society or not…
The second purpose of the Society is to assist priests in their sanctification by providing them with opportunities for retreats and recollections. The Society’s houses could be headquarters for priestly associations, for third orders, for periodicals and magazines dedicated to the sanctification of priests…

The Society will willingly come to the assistance of aged, infirm, and even unfaithful priests.

Faithful to her mission, rather than condemning and casting the first stone, the Society comes to the help of priests to restore their priesthood and sanctify themselves.

To Church Militant: we ask you retract this scandalous article. It is easy to contact us. If you are more concerned with the truth than clicks, you can still make reparation. We simply ask that you apply the same principles to your article about Fr. McLucas that you do to your articles about Fr. Perrone. In the meantime, for your readers–whatever they think of the SSPX–we hope this clarification shows which side maintains journalistic integrity, and more importantly, Catholic charity and justice.

Reprinted with permission from SSPX.org. View all posts
You are not signed in as a Premium user; Premium users get 10% discount in the store! Sign in or Sign up today!

'Church Militant's response to the SSPX'

The Vortex: You Call That a Response?
The Vortex: Not Looking Good at All
The Vortex: 'Eternal Rome'
KBI Tip Line for SSPX Clergy Abuse
Church Militant's Action Arm for Whistleblowers, Investigators

The position of Church Militant concerning the SSPX is that of the Holy Father, Emeritus Pope Benedict XVI, as expressed in the motu proprio Ecclesiae Unitatem, issued July 2, 2009:

In the same spirit and with the same commitment to encouraging the resolution of all fractures and divisions in the Church and to healing a wound in the ecclesial fabric that was more and more painfully felt, I wished to remit the excommunication of the four Bishops illicitly ordained by Archbishop Lefebvre. With this decision I intended to remove an impediment that might have jeopardized the opening of a door to dialogue and thereby to invite the Bishops and the 'Society of St. Pius X' to rediscover the path to full communion with the Church​. As I explained in my Letter to the Catholic Bishops of last 10 March, the remission of the excommunication was a measure taken in the context of ecclesiastical discipline to free the individuals from the burden of conscience constituted by the most serious of ecclesiastical penalties. However, the doctrinal questions obviously remain and until they are clarified the Society has no canonical status in the Church and its ministers cannot legitimately exercise any ministry. (emphasis added)

The SSPX bishops were excommunicated and their illicit consecrations defined as schismatic in the motu proprio Ecclesia Deiissued July 2, 1988. The excommunications have been lifted, but the canonical status of the SSPX remains unchanged.

There are two important points here:

1. The SSPX is not in full communion with the Church and is invited by the Church to rediscover this path.

2. The SSPX has no canonical status in the Church and its ministers cannot legitimately exercise any ministry.

This has never been formally changed by the Holy See, in spite of Pope Francis' recent indults allowing the Society to hear confessions — a benefit provided explicitly for the good of the faithful in the Jubilee Year of Mercy, and extended indefinitely.

Communion with the Chair of Peter is a constitutive part of Roman Catholicism — something the SSPX accepts in principle but rejects in practice. As Pope Benedict said, the SSPX has 'no canonical status,' 'no legitimate ministry,' is 'invited to rediscover the path to full communion,' has no faculties from any bishop, is not part of the divinely ordained hierarchical structure of the Church and all its priests are suspended a divinis. 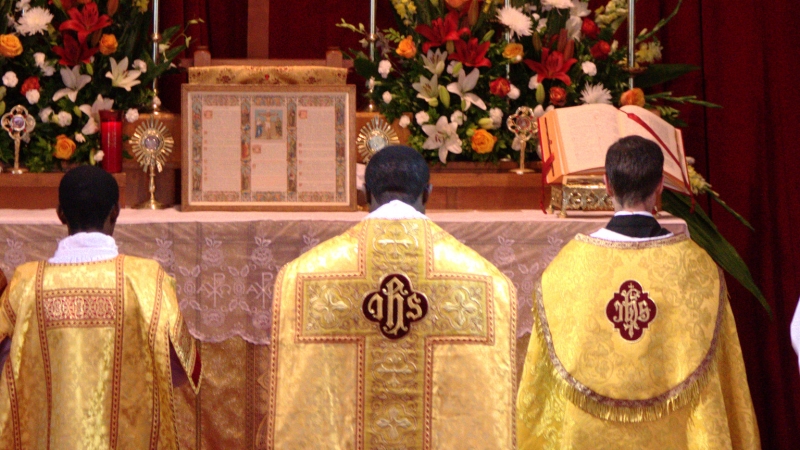 We are well aware of ongoing dialogue between the SSPX and Rome. It is to be fervently hoped that this dialogue results in a return of the SSPX to full communion with the Church, granting its bishops and clergy canonical status and the authority to exercise ministry. Reconciliation of the SSPX with the Church would be a great blessing for the Church but most especially for the SSPX. The SSPX has consistently refused the most generous and magnanimous invitations from the Church to reconcile and place itself under the authority of the Vicar of Christ, rejecting his dogmatically defined 'full power of shepherding, ruling and governing the universal Church,' a power 'ordinary and immediate over all the churches and over each and every member of the faithful' ('The Pope Exercises Supreme Jurisdiction' [Original Italian here]).

Perhaps the SSPX fears it will be crushed by an unsympathetic hierarchy and pope. Perhaps it is justified in such fearful apprehensions. But there is precedent in the history of the Church — in the lives of the saints, in the life of Our Lord Himself — for risking or allowing oneself to be crushed by obedience. Until such time as the SSPX chooses to reconcile with the Church, Church Militant must support the judgment of the Holy Father and the Church concerning its status.

'Fr. John Emerson, FSSP: The Break With the SSPX'

'A Canonical History of the Lefebvrite Schism'

'Why I Left the SSPX'

'Why I Left the SSPX Milieu'

'Sheen Even Called It Schism'

'My Journey out of the Lefebvre Schism' (external website)