Sometimes when life gets you down you just need to record an audio message of yourself screaming into your phone and smash that send button.

It isn't the most emotionally rational move, but boy is it cathartic.

With iMessage, you can share your location, send walkie-talkie style voice messages, get confirmation your message has been delivered, get read receipts, and see whether someone is replying to your message in real time (those animated little grey dots that show up underneath your message). The reason audio messages disappear from your iPhone is because the setting was not done and by default it will only last for a maximum of two minutes. Audio messages sent through iMessage are set to automatically expire after two minutes unless you actively choose to save them.

Sending a text message that reads 'AHHHH!' just isn't as satisfying as recording an audio message of yourself actually screaming. I don't care how many H's you add to the 'AHH' or how many exclamation points you tack on the end of that baby. In certain cases, audio messages are just better tools for communicating than typing, which is one of the reasons I use them on a daily basis.

My love language is voice memos instead of texts

It's not often I come across a fellow audio message stan, but after years of utilizing the iMessage feature I've managed to convert some friends to Team Voice Text. To be clear, I don't send audio messages all the time. I'm not a monster. But when I'm feeling too lazy to type, have a lot to say, or feel as though my actual voice will lend important emphasis or clarification to a message, sending an audio clip truly comes in handy.

Sure, voice messages aren't always as practical as regular text messages. But they serve several unique purposes, and it's time we normalize sending them.

What are audio messages and how do you send them?

For all the audio message newbies out there, let me first highlight the fact that audio messages aren't the same as talk-to-text messages. The later feature allows you to dictate text messages into your phone's mic and the words are typed out for you, whereas the former feature actually lets you record and send audio clips of your voice.

If you have an iPhone, recording and sending voice messages can be done directly in an iMessage chat. Once you open up a conversation, just touch and hold the microphone icon in your text box and start speaking. After your message is recorded and you lift your finger off of the screen, you'll be given the option to play your message back, delete it, or send it to the person or group at the receiving end of the chat.

If you don't have an iPhone, don't fret. Other messaging platforms, such as WhatsApp and the Google Messages app, also offer similar audio message features.

The acquired appeal of audio messages

Sourcetree merge tool. Though audio messaging takes some getting used to, once you realize how convenient and intimate the feature can be I hope you'll understand the appeal.

Whenever you need to tell an exceptionally long story or explain something that your thumbs don't have the energy to type out, audio messages are there for you. And whenever you want to let someone know you're actually laughing at something they said, sending a clip of your cackle is infinitely more gratifying than texting another tired, insincere 'lol.'

'I don't send audio messages to everyone.'

Audio messages are great time savers, and they're also a perfect way to show someone that you feel extra comfortable expressing yourself to them. I don't send audio messages to everyone. They're reserved for my closest, most trusted friends — people I know will not only tolerate, but enjoy my audio messages as much as I'd enjoy receiving theirs. And if your best friends don't like them, too bad. They're your best friends and they can deal.

Idk why I didn’t utilize the voice memo stuff in place of texting or the speak-to-text. I love hearing my best friend just send me a voice text telling me that she loves me. 🥰🥰

I appreciate audio messages cause I love hearing people’s voice. I can tell their mood, their tone and it’s more sincere than txting.

i only send audio messages to people i would die for

I've utilized audio messages for years, but in quarantine I've come to appreciate the feature so much more. I miss chatting verbally with friends and family members, so these days it's especially comforting to hear their voices come through my phone speakers.

Some people might argue that sending voice messages back and forth is similar to having a phone call, but it's a very different experience. While voice messages allow you to year your contacts speak, they're more like using a walkie talkie than having a phone call. They have the audio benefits of a call — such as allowing you to hear tone of voice and inflections — but they nix the anxiety factor, and also give you a chance to respond in a delayed fashion. Another perk is that they disappear in iMessage chats after two minutes. (Though you can save them for longer if you choose by going to Settings > Messages > Audio Messages > Expire.)

if we text and u send me voice memos, that shit is so cute

Audio messages are fun ways to add variety to your digital conversations, but they do have some downsides. For one thing, if you're using an Apple device and iMessage isn't enabled for one member of your conversation, the feature won't be available to you.

You also won't always be in a setting that's conducive to listening to or recording voice texts. If you're watching TV, listening to music, or in the presence of other people for instance, you'd likely be able to read regular texts, but might not be able to listen or send audio messages.

And it's crucial to remember that audio messages, like voice tweets, have an accessibility problem. Their lack of captioning means that the feature isolates people who are deaf or hard of hearing. So it's important to carefully consider the recipients of each voice message before sending them in your chats.

Audio messages on WhatsApp is like cilantro, you either love it or you hate it

Audio messages are ultimately imperfect and definitely not suitable for every conversation, but they've become a core part of my texting style. I plan to keep using them when I feel they have something to add to an interaction, and I encourage other people to give them a try, too. Hopefully one day sending audio messages won't seem so out of the ordinary. 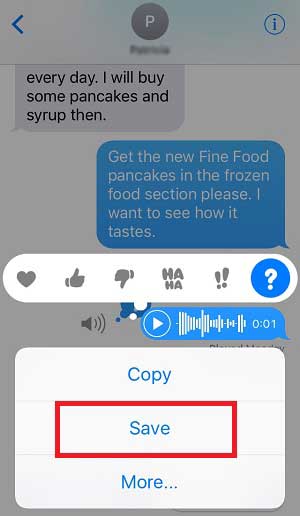 How To Change Imessage To Text Message

UPDATE: Aug. 27, 2020, 7:49 a.m. EDT Updated to include details about the accessibility problem with audio messages.