Broadway. Kilwa Kisiwani. World wonder of the Ancient Era The women's baths were almost as elaborate, and more highly decorated with murals and mosaics. Civ 6 Civets System Get 5 Civic boosts in 1 turn. Hagia Sophia. Great Barrier Reef. Mont St. Michel. The Great Bath is an Ancient Era Wonder in Civilization VI: Gathering Storm. Wonders: Kilwa Kisiwani lets you get the most out of all the city-states that you’re suzerain of. Ensure that you have decent gold generation to keep up with your spending habits.

A quick visit to Kilwa Kisiwani gives a thrilling memory when discussing the rich history of the Swahili coast that extends along the Eastern coast of the Indian Ocean in Tanzania.

Despite the beauty of this Island which is located in Kilwa District, Lindi Region, memories of the past civilization and early settlements could be a memoir of a lifetime for any tourist venturing this part of Tanzania.

With its twin island of Songo Mnara, Kilwa Kisiwani is the United Nations Scientific and Educational Organization (UNESCO) World Heritage site, known by its rich history and Swahili cultural heritage blended with African and Arabic cultures.

Kiliwa Kisiwani is a tourist site, standing among the leading, earliest trading towns on the East African coast. Historical buildings in the island were constructed with coral stone mixed with limestone materials which had made the architecture beautiful and stable to survive weather conditions characterized by humid and hot temperatures for hundreds of years.

The Island had its prosperity achieved from the control of the Indian Ocean trade with Arabia, India and China between the 13th and 16th centuries, when gold and ivory from the mainland Tanzania and Congo were traded for silver, carnelians, perfumes, Persian faience and Chinese porcelain.

Most attractive, are mosques built in 13th century and a Portuguese Fort, which are presently give the island its historical fame. These mosques are dating between 13th and 18th centuries.

Between each mosque, there are cemeteries and worship places decorated with early Chinese porcelain and Persian artifacts including ceramics materials from the Middle East. Kilwa Kisiwani was occupied from the 9th to the 19th centuries by Oman Sultans and Persian merchants. Between 13th and 14th centuries, the island thrived as a leading business center on the Indian Ocean coast.

According to great Muslim traveler Ibn-Battuta who visited and stayed in Kilwa Kisiwani between 1331 and 1332, the island was ranked among the most beautiful cities of the world during that time.

The Great Mosque of Kilwa was the largest mosque of its kind in East Africa. The mosque accommodates two mosques, all constructed in 11th century.

Ibn-Battuta had explained this mosque to have been built by the ruler of Kilwa Kisiwani, Sultan al-Hasan ibn Sulaiman.

Makutani palace is the other building of the past where the sultan of Kilwa Kisiwani resided. The building was constructed in 1516 and fitted with minarets to encounter invaders.

There are spacious rooms for women and bathrooms; all decorated with earthen-wares and ceramics. Orchids and green trees were planted to provide shade and beautifying the palace.

Mrs. morris and the ghost pdf free download. Another attraction at Kilwa Kisiwani is the Portuguese Fort. This beautiful building was later used as a garrison by the Arabs and Germans to punish Africans who opposed their occupation over the east coast.

Kilwa Kisiwani remains the old trading town of the Indian Ocean and that had attracted trade with Arabia, India and China, particularly between the 13th and 16th centuries, when gold and ivory trade from the mainland Tanzania thrived.

Most interesting, Kilwa Kisiwani minted its own currency in the 11th to 14th centuries.

Every Civilization game since Civilization IV has followed the same trajectory: the initial release remixes and reinterprets some base systems from the previous game, but franchise veterans deem it anemic because it has fewer systems and features than its fully expanded predecessor. From there, new expansions gradually reintroduce the complexity that was lost in the move to a new game until many of those players conclude that it is the best game in the series yet.

In many ways, though, 2016's Civilization VI was a bigger departure than previous entries were, and it has been divisive accordingly. The game completely overhauled how cities were expanded and how religious warfare was waged, among other things. If you're a Civ traditionalist who felt Civilization VI strayed too far, you won't like this latest expansion. It takes the changes even further. But if you've been itching for even more ambitious fresh ideas in a franchise that has historically been very conservative, you'll find what you're looking for here.

After binging a couple of games of a 2K Games-provided early copy of Rise and Fall virtually non-stop for the past day and a half (as you do), I'm not quite sure this expansion adds enough meat to make Civilization VI feel as robust as its predecessors. So far, I'm left with the impression that we're moving in the right direction, but we haven't quite arrived yet.

The requisite new leaders and wonders

Just like previous expansions for previous Civ games, Rise and Fall adds a bunch of new leaders and wonders. In this case, we have nine new leaders, and every one of them brings something truly unique to the table. It's always impressive when this series manages to create entirely new playstyles with just a few bullet points of new rules for an added leader.

I tried a few of them and found that Rise and Fall follows that tradition quite well. Here are all the new leaders, along with their attributes:

Building wonders is one of Civilization's great pleasures—made all the better by VI's lovely wonder completion animations—and I count eight new wonders in Rise and Fall. Some have appeared in past games, but others (like Antarctica's Amundsen-Scott Research Station) haven't. A few of them play off new mechanics like governors and loyalty, but most of them are pretty classic, actually.

Here are the Civilopedia entries for each of them:

Some of the wonders are quite powerful, and they all fill some niche not previously filled by Civilization VI's existing wonders. There are also four new units, two new districts, and a handful of new resources. None of those are major additions—except for the Government Plaza district, which we'll examine more closely later.

There are also several small UI tweaks and some adjustments to the contents of the civics tree. Notifications are consolidated in clever ways to avoid overload, and so on. Every UI tweak was welcome.

Firaxis even endeavored to improve the AI in Rise and Fall. The improvements are noticeable, but there's still some wonkiness. You still see AI leaders making bizarre military decisions, but they don't hassle you with nonsensical diplomatic communications as often.

That's it for the obvious stuff. Let's get into the new systems.

Civilization VI is a game about building a civilization 'to stand the test of time,' and, ostensibly, you have multiple ways to do that—some violent, some peaceful, and some a combination of the two. One of my biggest problems with the game as compared to some previous titles, though, was that the peaceful path never seemed very relevant.

The game's AI always seemed rigged to stir up unnecessary drama to keep things exciting (as if Queen Victoria was an over-the-top reality TV star), and I usually found that war was the only way to effectively quell that drama—even if conquest was not my target victory condition. And forget about diplomacy; it was paper thin, and the AI always seemed to find a reason to turn on you 20 turns later anyway.

First, alliances have been overhauled. There are now multiple alliance types. A research alliance causes trade routes between allies to generate many more science points or makes allies automatically share technology boosts from time to time. There are also military, cultural, religious, and economic alliances.

Alliances gain levels and become more powerful over time. This gives the actors on the world stage, including the player, incentive to be less fickle and antagonistic. There's still no world congress or equivalent, though. 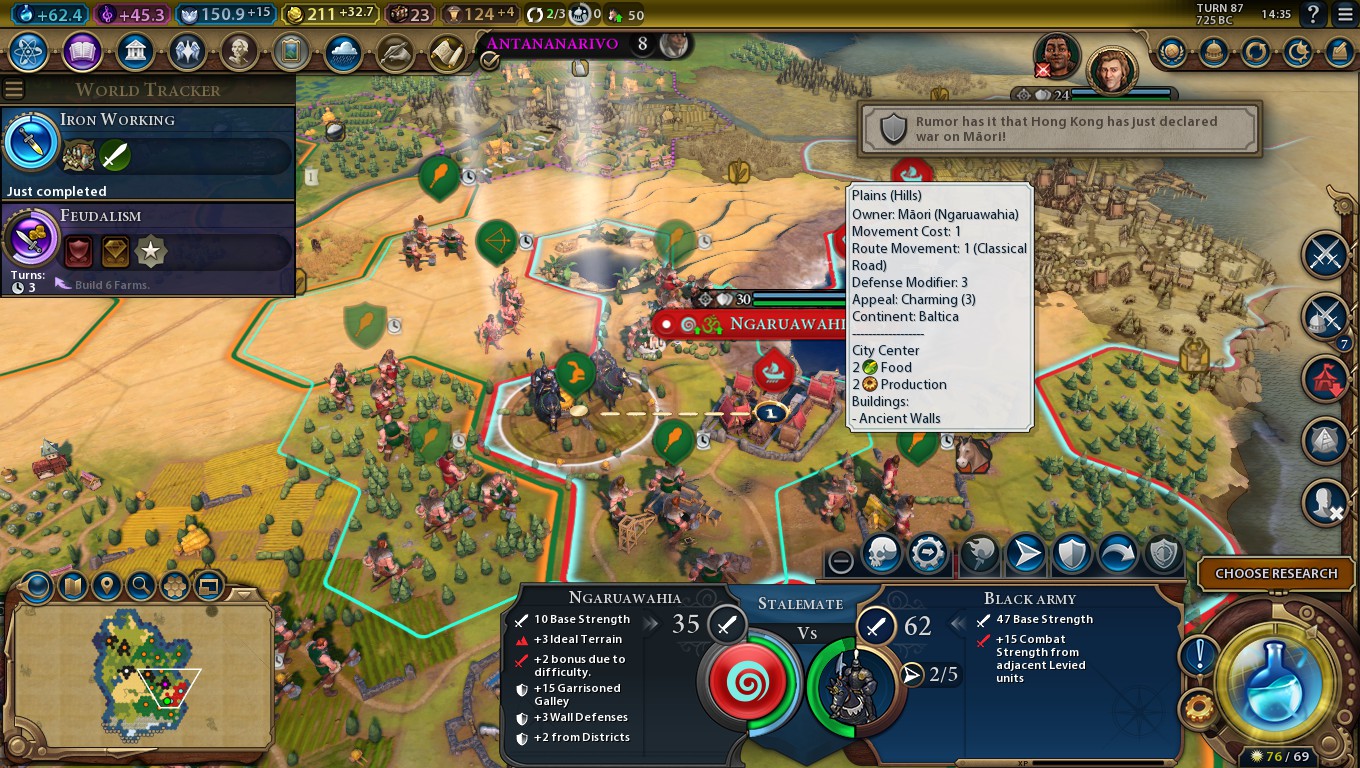 Your cities now each have a loyalty score which represents how invested citizens are in your own government and culture. Keeping them happy, assigning a governor, enacting certain policies, and other actions can help generate enough loyalty to keep your cities, well, loyal. But other civilizations can foster loyalty in your cities, too—and vice versa.

Cities on the border between two civilizations are always harboring a sort of cultural cold war. If China fails to foster enough loyalty in Shanghai, and neighboring Greece is pumping out the influence, Shanghai could very easily flip into Greece's hands—kind of like culture-flipping in prior Civ games. Further, if you build a city far from your home cities and another civilization is nearby, it's almost certainly going to end up in enemy hands (or just independent, in which case it basically becomes a barbarian city) without a shot fired unless you get very clever about how you approach it.

Here's a screenshot illustrating how this works. (Most of the screenshots and examples we'll see are from the same game; this hopefully helps give a sense of how these features play into the arc of a single playthrough.)

This makes the domination victory much harder than it was previously. It's very difficult to prevent insurgency when you're occupying cities in far-off lands. At one point, a city state—Stockholm—was sitting between my civilization and that of my nemesis, Shaka. I decided to conquer Stockholm with my superior army, but it didn't do me a lot of good. The city very quickly flipped to become a free city, because I wasn't providing enough loyalty and Shaka's influence was overpowering. I ended up reconquering it only to lose it again two more times. On a final conquest, I just razed the city because I couldn't possibly keep it.

It turns out, being an occupying force is difficult. This is relatively realistic, but players who like to bulldoze through the world with their armies will find that the game no longer plays out in the way to which they're accustomed. That said, I get the sense that with more experience and very deliberate planning, it would still be possible to do what I was trying to do. It's just a lot more fraught than it used to be. 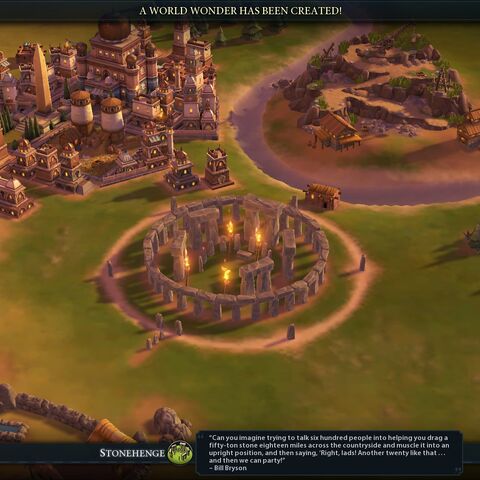 This system makes thoughtless aggression less fruitful, and it finally gives you nonviolent ways to expand your empire and hinder your enemies in Civilization VI. It's the best thing about Rise and Fall.

When I conquered Stockholm without a reasonable casus belli, I triggered another of the game's new features: an emergency situation. The game set up a short contest between me and the other civilizations with a stake in what happened. They were given a short period of time to 'liberate' Stockholm. If they succeeded, they would receive substantial bonuses (check out the screenshot for details). If I fended them off, I would receive a bonus instead.

Since emergency situations are designed to band weaker players together against a belligerent leader (usually me—no apologies), they're meant as a sort of catch-up mechanic—kind of like a far less ridiculous variation of the blue shell from Mario Kart. The intent is that the leader has a steeper incline ahead of herself since the other civs are teamed up.

That said, there's no good way for the other civs to coordinate their efforts, so it doesn't always play out that way. It also feels arbitrary, abstract, and game-y in a game that normally feels more like a simulation—why would I be rewarded 1,000 gold for defending my city? It feels like Rise and Fall's least-baked idea.