Affiliate Disclosure: Some links mentioned below are affiliate links, we may earn some amount if you make a purchase. Users can share calendars, notes, send/ receive emails on Outlook for Mac the same as MS Outlook. Mac OS High Sierra, Outlook 16.11 thru 16.13, Exchange 2010 on premises. Although I’m extremely grateful to have found this post, neither workaround worked 100% as the issue comes back. Downgrading to Outlook 15.37 solves the problem but don’t want to do that with end users just yet.

'You've told us that working together across platforms is a priority to you,' MacBU general manager Eric Wilfrid said in a canned statement to the Office for Mac faithful, 'and that's why we are making Office for Mac 2011 the best, most compatible productivity suite on the Mac.'

Strong words? Not really. Competition is limited to the likes of OpenOffice.org and Google Apps. But those two are available for free. The entry-level version of today's Office for Mac - the Home and Student Edition - runs $149.95.

Microsoft announced last August that Outlook was coming to Office for Mac 2011, and as expected, Outlook for Mac will tie into Microsoft's Exchange Server using the Exchange Web Services protocol. Plus, the app will be able to import .PST (personal storage table) files from Outlook for Windows - a feature that the MacBU described as 'a top customer request.'

Another top customer request - or, rather, complaint - is also being addressed: Visual Basic support, which was pulled in Office 2008 for Mac, will return in Office for Mac 2011. And, yes, the two names are dissimilar. Go figure.

The new co-authoring tools will allow user to share files on a Windows Live SkyDrive, a Microsoft SharePoint, or through the still-in-beta Office Web Apps. Manycam 6.2. Word and PowerPoint files will have access to all three services, while Excel will be limited to Web Apps. A new Presence Everywhere feature will provide updates on who in your collaborative group is working on what.

Office for Mac 2011 will also have interface updates - including the love-it-or-hate-it Ribbon of Office for Windows - but after the howls of protest roused by some of the UI rearrangements of Office 2008 for Mac, the MacBu says: 'We took your feedback and haven’t completely rearranged what you know and love.'

The MacBU didn't give a firm release date for Office for Mac 2011, saying only that it will appear 'later this year,' nor did it provide pricing and versioning information. If you're a fervid Office for Mac fanatic, however, you can keep up-to-date on the productivity suite's progress on Twitter or on the MacBU's Facebook page. ® 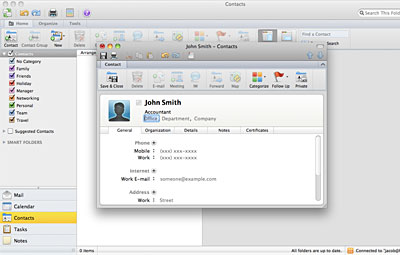