The world’s first browser designed for gamers, Opera GX, is aimed at attracting people already using platforms like Google Stadia. However, this new product on the market works just a bit different. Though the browser doesn’t let you stream games, it does boost the overall performance of your gameplay (Chromium-based) by limiting the RAM and CPU.

The browser offers plenty of features to complement its amazing design. 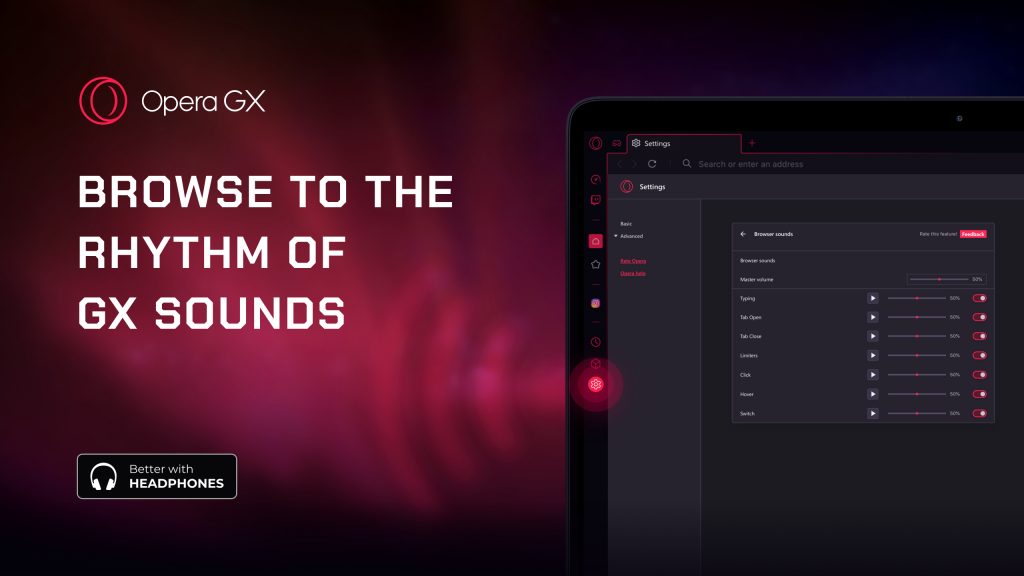 Opera is a leading name among new-generation browsers. Though it’s not always people’s first choice, the developers have made improvements to attract a new user base. Opera GX targets gamers, letting them switch from a generic browser to a new and exciting internet experience.

Aesthetics and interface take the lead

From the get-go, the browser looks distinct and refreshing. When compared to its competitors, Opera GX has a vibrant color palette, giving it the look of gaming accessories, such as laptops and keyboards. It’s much darker than simpler browsers of the past. On startup, you’ll notice an animated logo with a short auditory note. In fact, Opera GX is the first internet browser to get an animated boot logo.

Its audio component and several interaction sounds have been created by renowned sound designers (Ruben Rincon and Berlinis). Their sound design for the popular game Gris won them many awards.

The dark theme is perfect for gamer-style choices. It provides you with a familiar environment, similar to websites and apps designed for late-night gameplay. There's a striking difference when compared to other browsers. While working on Opera GX, you’ll enjoy faster speed. However, it might take you some time to get used to the intriguing sound effects while interacting with on-screen icons.

With a modified search bar, the home screen has several speed dial icons inspired by the basic Opera browser. Once you begin typing, you notice a visual flare firing a red bar across the base. In order to make search results clearly visible, the speed dial icons instantly fade out. Almost every icon has an interesting mouse-over animation.

Using the ‘Easy Setup’ menu, you can customize everything on the screen. Within seconds, you can adjust background wallpapers, colors, and themes. Opera GX lets you choose the desktop wallpaper without looking for the original image on your Windows PC.

Razer fans are in luck

If you’re a Razer fan, you’ll be glad to know that Opera GX comes with Chroma integration, allowing you to conveniently make changes to theme color, menu, and icons. Additionally, the changes will instantly show on your connected Razer devices.

Opera has already announced that its considering additional peripheral support for Opera GX. If the gaming browser remains popular over the next few months, you can expect companies like Corsair and Logitech to provide support in future updates.

Opera GX has retained the left-hand toolbar from the basic browser version. However, in-browser apps like Facebook Messenger and Whatsapp have been replaced with gaming-oriented apps like Twitch. It’s easy to sign in to these apps from the browser. Once your preferred streamers start playing, you’ll receive push notifications too.

With GX Control, a menu option in Opera GX, you can customize the system resources to consume only what’s required. The browser lets you limit the percentage of CPU cores being used at one time. While Opera GX needs at least one core, you can limit the rest to ensure the browser isn’t slowing down your PC.

Similarly, you can limit RAM (memory usage). Since some web pages can use a huge amount of your PC’s memory, Opera GX comes with a built-in limiter to help you take control. If you open new tabs after crossing the limit, the browser will automatically start killing the old ones.

From the control center, you can also manage the browser’s volume. It allows you to easily reduce or mute games and web pages without unnecessarily changing the system volume.

Without a doubt, Opera GX is an interesting browser for gamers. While it has a wide range of features to keep you interested, the vibrant dynamics alone will keep you hooked. It won’t be surprising to see Opera GX become an integral part of gamers’ lives.

Where can you run this program?

Opera GX is a web browser specifically made for gamers. It is available for Windows, and has been developed by Opera Software AS.

Is there a better alternative?

While Opera GX is the first-of-its-kind, there are other similar platforms you might want to check out. Itch.io, a popular gaming platform, is used by game developers and gamers around the world. Currently, the website has more than 100,000 unique pieces of content, allowing developers to upload games while giving the freedom to choose price. However, Itch.io has a limited desktop client, and the library caters to a small audience.

Another good choice is Google Stadia, which is a cloud-based streaming program. Its ability to deliver games at 60 frames per second at a 4k resolution is appreciated by gamers worldwide. Additionally, it supports a high-dynamic range. Unfortunately, the platform is>Opera GXfor Windows