are also patients of a healthcare practice

I think we can call agree that collecting co-pays and deductibles is an important part of valuing the services that healthcare practitioners provide.

Co-pays, despite what most people believe are NOT JUST a cost sharing method to off load a portion of the insurance carriers’ required payment onto the patient in exchange for lower monthly premiums. The creation and thought process that goes into the deductibles, co-pays and co-insurance is a well thought out actuarial symphony designed to also create a psychological barrier for the patient to NOT use their health insurance. The insurance carriers have priced this “non-use” into their premium models, and they expect and contractually require doctors and facilities to collect these payments, or be in violation of their contract.

Collecting coinsurance, copays, and deductibles upfront is an important piece of the effort to accurately value the services we provide. And yet, we still hear about practices that routinely waive their patients’ deductibles and copays. Today, I’ll discuss another reason not to routinely waive deductibles and copays. The statute also prohibits waiving, giving, paying or offering to waive, rebate, give or pay all or part of a patient’s insurance deductible. At § 41-348(2)).

And yet, we still hear about practices that routinely waive their patients’ deductibles and co-pays because the patient is also an employee of the practice.

Besides the obvious loss of revenue, let’s discuss another reason not to routinely waive deductibles and co-pays. Ever hear of something called the Anti-Kickback Statute?

Here is the skinny…

When a provider waives co-pays and deductibles for members of a Federal Healthcare Program, it could implicate the Civil Monetary Penalties Law (42 U.S.C. 1320a-7a(a)(5)) and the Anti-Kickback Statute (42 U.S.C. 1390a-7(b)(b)). For private payers, the participating provider agreements often require the collection of the patient’s cost sharing amount. Under PA Law, a claim could be brought under the Insurance Fraud statute (§ 4117).

We can almost assume, you are saying… but…

what about Employee Courtesy?

Before getting into the details of why waiving polices for employees, which might seem like a great idea as a very low cost “benefit” or “perk” … we need to talk about employees as a whole. Here’s a little known fact, employees quit and sometimes they resign because they feel they were wronged during their time of employment. And employees will sometimes point a finger at their past employer for questionable “billing practices.”

With this in mind, now think about your attempt to do something “nice” for your employees which could backfire on you when not properly crafted.

So what if you are of the mind-set that the employees of the practice are not going to abuse the system or point out any questionable billing practices… what then? Hmmm think about it this way… You, as the employer, receive plan design options from your Broker annually for the group medical plan with deductibles ranging from let’s say $0 to $5,000/ family coverage.

You choose, as the EMPLOYER (not practice owner) to offer benefits, and select the $1,000 deductible plan. It lowers the premium you pay as the employer by cost shifting $1,000 out of pocket to the employee and their family right? But wait, you have a policy of waiving the deductible, and then nicely “requiring” all employees to come in for care. You have now effectively received a premium reduction for a deductible that you never planned to collect and this could be construed as a possible violation of the Anti-Kickback statutes, a violation of your employer contract and a violation of the provider contract.

In fact there have been cases in which local Blue Cross entities have done massive recoupments as well as filed criminal charges for large family, primary care, physical therapy and chiropractic offices, which can more easily have routine repetitive visits, for using just this tactic. Don’t let that happen to you.

Now what? Before you create any Employee Handbook policies that give your employees a waived or reduced fee, or create a Standard Operating Procedure for deductibles, co-pays and co-insurance collections for your practice, you should contact McCloskey Partners, LLC for assistance with setting up these practices to avoid the potential for fines and penalties.

Check us out at http://www.mccloskeypartners.com/our-services.html Or follow us on social media.

Many insurance companies require patients to make a copay when the insurance pays for certain medical bills. Co-pays can be burdensome for patients. But the government views them as an important part of Medicare. As a result, routine copay waiver is illegal and results in criminal and civil penalties. Routine co-payment waiver also violates the False Claims Act, and the government and whistleblowers can recover millions of dollars for this practice.

What Is A Copay?

Copay is short for copayment. It is a portion of a medical bill that the patient is responsible for paying directly to the provider. The amount of a co-pay is set by the insurer. For example, the copay under Medicare Part B, which covers doctor visits and most out of hospital services, is 20% of the total approved charge.

Copays are not charged for all procedures. For example, the Affordable Care Act, also known as Obamacare, requires that certain preventative procedures must be covered without any cost sharing.

Copayments, coinsurance and deductibles are collectively referred to as patient cost sharing. The Government views them as an integral part of the Medicare and Medicaid programs. It believes that requiring patients to share some costs makes them better health care consumers. This is a hotly debated issue in health policy. Recent proposals to reform health care, including most Medicare for All proposals, entirely eliminate patient cost sharing.

What Is A Copay Waiver?

Copay waiver occurs whenever a health care provider or supplier is paid by an insurer but chooses not to collect a copay. Co-pay waiver can take several forms. These include:

When Is It Illegal To Waive Copays?

It is important to remember that not all copay waivers are illegal. Only routine co-pay waivers designed to induce additional business that violate the law. For example:

It is not illegal to write off a patient’s copay balance if the provider makes a good-faith attempt to collect. However, when a provider has a policy of not attempting to collect copays that becomes illegal. Health and Human Services, Office of Inspector General, identified several suspect behaviors that indicate illegal routine copay waiver. 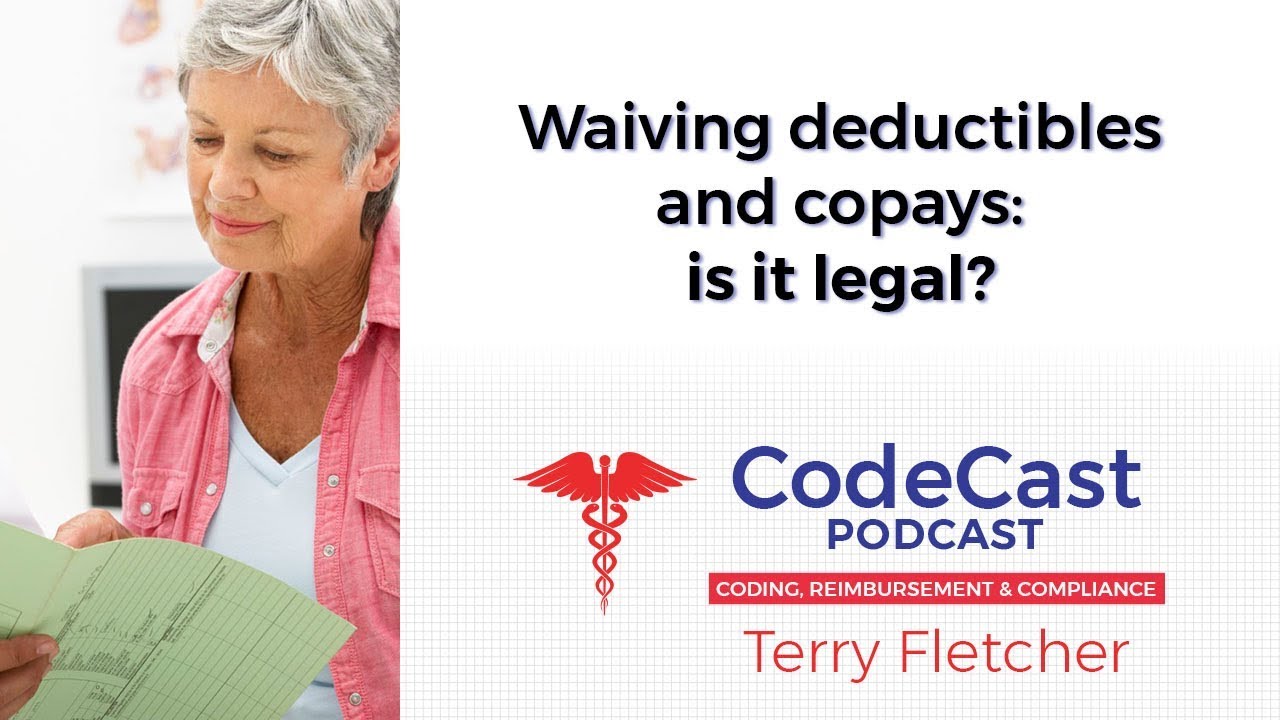 It is entirely appropriate for providers, practitioners or suppliers to forgive the copayment if the patient has a demonstrable financial hardship. Similarly, a legitimate Patient Assistance Program (often referred to as PAP) is entirely legal. However, the provider must make an individualized determination of patient need. When a provider regularly waives copays due to financial hardship without actually evaluating patients’ needs, it violates the law.

The government has recently been cracking down on a sophisticated version of this fraud. Large companies help establish independent Patient Assistance Programs. Those charities, in turn, pay co-payments for customers of the company’s product. The government recognizes this as illegal copay waivers and, along with whistleblowers, has obtained millions of dollars in settlements. These include:

Why Is Routine Copay Waiver Illegal?

Routine waiver of deductibles and co-pays violates the law for two reasons. First, it violates the Anti-Kickback Statute. Second, it causes Medicare to pay more than it should in violation of the False Claims Act.

Why Does Routine Copay Waiver Violate The Anti-Kickback Statute?

To install Office, try signing in directly to the Microsoft 365 Software page instead. Select the language and bit-version you want (PC users can choose between 32-bit and 64-bit), and then click Install. See Steps 2 and 3 on the PC or Mac tabs above to help you with the rest of the install process. Install explorer on mac.

Moreover, providers and manufacturers often use copay waivers to induce doctors to prescribe their drugs or products instead of cheaper generic competitors. The Anti-Kickback Statute also prohibits offering discounts to induce prescriptions or referrals of your product.

The False Claims Act forbids anyone from submitting a false or fraudulent claim to the government. Routine waiver of copays leads to false claims for two reasons.

Second, a provider that routinely waives copays or deductibles is lying to the government about the cost of the drug. Medicare typically pays 80 percent of the reasonable charge for a good or service. Generally, Medicare will not pay more than the customary charge or the highest prevailing charge.

So, when a provider tells the government that the “actual charge” is $100, Medicare is willing to pay $80. But, when the provider routinely waives the $20 copayment, the actual charge is $80. The provider inflated his actual cost by $20, and if Medicare had known the truth, it would only have paid 80% of that or $64.

What Are Penalties For Routine Copayment Waiver?

While it seems like waiving copays is good for patients, the Government takes a different view. Routinely waiving copays can violate the Anti-Kickback Statute and the False Claims Act. These violations can lead to lawsuits worth millions of dollars to the government and whistleblowers. If you are aware of a provider that routinely waives copays, Whistleblower Law Collaborative can help.

Elizabeth Warren recently unveiled a plan for the pharma industry. Noting that a substantial number of pharmaceutical companies have paid multi-billion dollar fraud settlements, Senator Warren has introduced a bill..

Well, it’s the day of the Iowa caucuses, as the never-resting machinery of American presidential politics kicks into high gear. Many people, understandably, are tired of it already. Yesterday, though, an..

The Johnson & Johnson settlement has all of the earmarks of a large complex health care fraud case. We discuss the features of this settlement that help understand how health..