Here are some anime-themed Winamp skins I made. So far, there's one of Narusegawa Naru from Love Hina, one of Peorth from Ah! My Goddess, one of Honjou Mikaze from Stratos 4, one of Chloe from Noir, and one of Soryu Asuka Langley from Neon Genesis Evangelion. 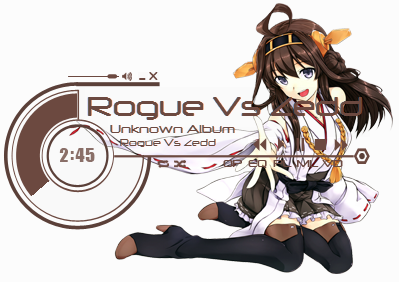 So many anime babes! So many mock-Macs! So much rusty metal! I wish I could remember the names of skins I used, there was a beautiful teal one I'd love to see again. The only one I could find again is the System Shock 2 skin (below, in the middle). Made by Jordan Eldredge, the Museum draws skins from the Internet Archive's Winamp Skins Collection.

The Naru Winamp skin I made by running an image through a couple of canned Winamp skin generators, then editing the results together.

The Ah! My Goddess, Stratos 4, Noir, and Evangelion Winamp skins were made by editing a skin made by Scott808 (who in turn got the basic design from somewhere else) and tweaking them a bit.

Granted, with these latter skins, Winamp's equalizer is rendered fairly useless, but if you have your presets saved ahead of time it shouldn't be a problem. Actually, I've found that the bigger hassle comes from accidentally clicking on the wrong close button when you mean to shut down Winamp altogether. That's why I left if off entirely on the Asuka skin. The button still works, of course—you just have to stab kinda blindly to hit it. Clicking the EQ button on the main controls does the same thing, anyway.

Oh, on the Peorth and Chloe Winamp skins, the rounded corners are transparent. You just can't tell from the screenshots. Additionally, the Ah! My Goddess, Stratos 4, Noir, and Evangelion skins all actually look better than the sample images, since the screenshots were down-sampled to cut down on their file sizes.

Finally, if you're curious as to why this introduction is so verbose, it's just my answer to the tyranny of search engine spiders. Paragon seagate driver for windows 10.

This is my first skin and I've only tested it on Winamp 2.80, so results may vary. I also made it so the volume button disappears when it's at 100%. I didn't bother skinning the mini-browser because I never use it.

A Winamp skin featuring Peorth from Ah! My Goddess (A.K.A. Oh! My Goddess and Aa! Megami-sama). Basic template stolen from Scott808.

I made a Winamp skin featuring Mikaze from the vastly underrated Stratos4. Basic template stolen from Scott808, again.

Made a Winamp skin featuring Chloe from Noir.

Made a Winamp skin featuring Asuka and Eva Unit 02 from Neon Genesis Evangelion.